ONE VALLEY, THOUSANDS OF OPPORTUNITIES


Situated between the Maritime Alps and the Cottian Alps, the Stura Valley is entirely crossed by the river that bears the same name and its tributaries: its climate and geographic position make this valley an ideal habitat for many rare botanic species, such as the Queen of the Alps.

From skiing to rafting, from cycling to horse riding, the Stura Valley offers the ideal environment for all sport lovers. Cyclists can have fun pedalling up and down the routes of the Giro, the Tour and of the Gran Fondo Fausto Coppi. Among secular chestnut trees and pastures, from the Cuneo plain to higher altitudes, the more experienced cyclists can tackle the roads that lead to the Lombarda and Maddalena Passes, to the Madonna del Colletto, the Vallone dell’Arma, as well as to the Shrine of Saint Anne and to Baths of Vinadio.Tourists can visit the majestic Forte Albertino in Vinadio, Borelli Palace in Demonte, the Neolithic Settlements in Aisone and the Eco-Museum of Pastoralism in Pietraporzio. 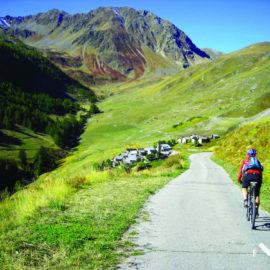 Despite its moderate length, this route crosses one of the most panoramic valleys of the whole area:
the Puriac. END_OF_DOCUMENT_TOKEN_TO_BE_REPLACED

This route is dedicated to road cycling. It includes two symbolic uphill sections of the valley: the
first one, which leads to Madonna del Colletto, which unfolds along the sunny side of the Gesso
Valley. END_OF_DOCUMENT_TOKEN_TO_BE_REPLACED