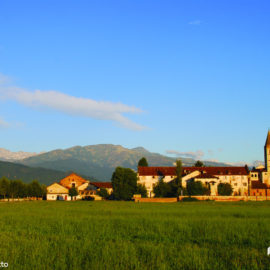 easy route that links Saluzzo to the entrance of the Bronda Valley, dominated by the evocative
fortress of Castellar with the homonymous castle build in the 14th century by the Marquesses of
Saluzzo. END_OF_DOCUMENT_TOKEN_TO_BE_REPLACED

A quiet ride in Saluzzo’s countryside. In spring, you can enjoy the blossoming of fruit trees. END_OF_DOCUMENT_TOKEN_TO_BE_REPLACED

The first tract stretches along the Eurovelo 8 line (also known as “The Mediterranean road”. With
its 5.900 km, it links Cadiz, Spain to Limassol, Ciprus). END_OF_DOCUMENT_TOKEN_TO_BE_REPLACED

An evocative route that starts and finishes in the medieval square called piazza Castello, surmounted
by the majestic Castiglia tower. END_OF_DOCUMENT_TOKEN_TO_BE_REPLACED

A flat route that partially extends along the “Cyclo Monviso” route and that, along secondary
roads, connects Saluzzo to Racconigi and Savigliano, offering the chance to admire their charming
historical centres. END_OF_DOCUMENT_TOKEN_TO_BE_REPLACED